If you have ever been to a really noisy party or a large gathering, you must have noticed that you can turn your attention to a specific person and listen to him/her in spite of all the other sounds. It is interesting how you can recognize and keep track of which voice(s) to follow. This process of selective hearing, in signal processing literature, is referred to as the cocktail-party problem or the source separation problem. This problem has been well studied in literature and is of great interest in the signal processing community. However, most of the previous work in this area deals with separating the sources based on either of two simplifying assumptions [[ICA]],

Now, Dictionary Learning is a process by which we aim to learn these distinguishing features of a class from a dataset (known as training data). This technique essentially learns the sparsifying features of a dataset. So why are we interested in sparsifying dictionaries (dictionaries which yield sparse representations)? Sparsifying dictionaries help us to represent the signals succinctly, such compact representations can help us define a particular class efficiently. When such dictionaries are learned on the go, without the use of prior training, it is known as Online Dictionary Learning [[Mairal 2010]].

This forms the algorithmic basis of the technique developed to solve the single channel semi-blind source separation problem. More formally, in each iteration of the algorithm we aim to find the representation of a signal in a set of known dictionaries and in the next step learn the unknown dictionary. After a few iterations, we have the desired source separation via their representations in these distinct dictionaries. We call this algorithmic framework as the Semi-Blind Morphological Component Analysis (SBMCA) as it is similar to the Morphological Component Analysis (MCA) [[Starck 2005]], [[Donoho 2010]], [[Bobin 2007]] technique for which all dictionaries are known. 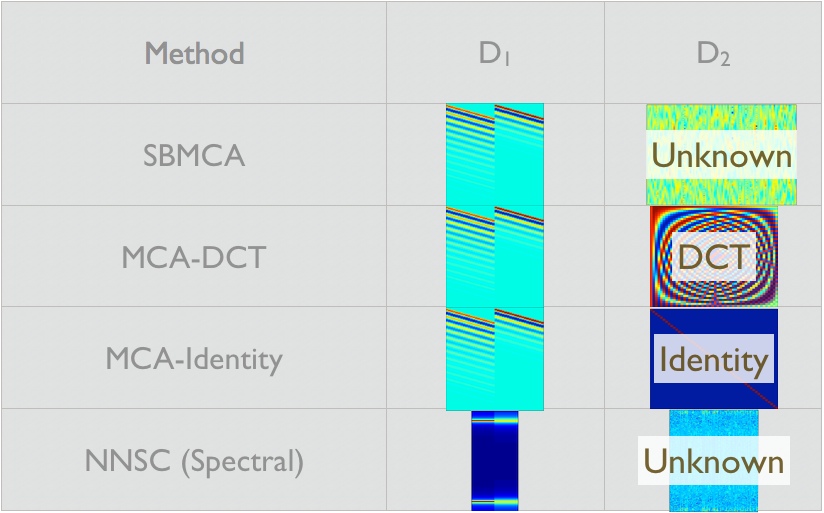 We motivate and propose a technique to solve the single channel semi-blind source separation problem via Semi-Blind Morphological Component Analysis. We base our discussion on intuition and motivating examples from day to day life. For a deeper analysis, algorithmic details and the results please see [[Rambhatla 2013]].